This is the first of many clips in the same storyline. Mistress Jean arrives at the slave farm. She is known to be a big spender. Jade Tiger and Mistress Dietrich are waiting for her as “horse” drawn buggy arrives. They hope she’ll be so impressed with their stock that she’ll purchase several of the slaves they have been raising. Jade and Dietrich have a selected one of their domestic slaves to be her hand maiden for the weekend. The ladies want to keep Mistress Jean as comfortable as possible during her stay. Dietrich shows Jean the electronic collar around the domestic’s balls and hands her the remote. Jean laughs at how easily male slaves are controlled by their balls. Then she shocks the slave’s balls several times. She’ll be spending the next two days evaluating corporal slaves and anal sluts. Jade and Dietrich assure her that she’ll be impressed with their stable. 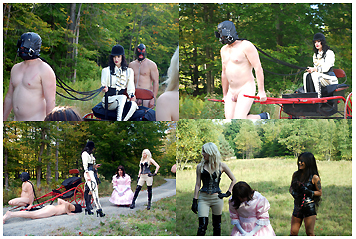