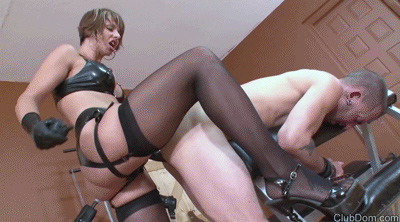 Madame Sade and Goddess Brianna ravish a slut with their strap on cocks. Sade strokes her cock hungrily as she watches Brianna ass fuck the male bitch. The ladies ride this slut’s ass and face, getting off on his humiliation. Once the ladies are satisfied they ram their cocks down the bitch’s throat and demand that he lick them clean. 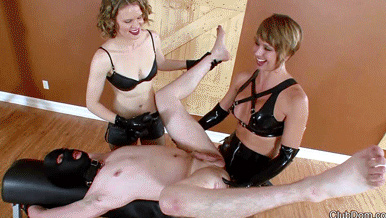 Mistress Kendra James leads her male bitch in by his balls. She is going to pile drive this slut with 12 hard inches. Kendra loves making her slut’s beg for every inch. She rides this bitch like she is a rodeo. Then she pulls out and slaps her bitch in the face with her huge cock. She demands that he lick her clean. Kendra rams her dick down the bitch’s throat. When she is satisfied she instructs the slut to jerk his own cock. She wants this bitch to cum on her boots so she can watch as he licks up his male filth. Kendra smiles as the slut complies. She knows that he is grateful for her dick.

Poor slave is all strung up and helpless in the most VULNERABLE position. The three young Mistresses lead by Mistress Isobel Devi, take turns stuffing his fuck-holes, making him lick their boots and kicking his pathetic useless cock and balls. The three young women look so incredibly hot as they laugh and encourage each other to destroy the piece of man meat strung up before them. Mistress Ricky and Mistress Raven have learned so much about the ways of femdom and know this is how life is supposed to be and that men are just pieces of meat to serve them. 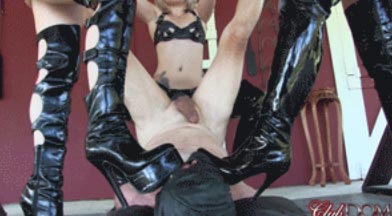 When Mistress Alexis Fawx sees that her slave did not clean her dungeon, she decides that a strict punishment is in order. After berating him for his poor job and slapping him in the face a few times, Alexis tells him his punishment – she is going to fuck him in the ass so hard that she is going to permanently stretch it out!

Alexis proceeds to fuck her bitch hard, using first his cock, then his balls as handles to help force her cock down even deeper into his manhole pussy. As she fucks him, Alexis makes her slave beg for more and promise to do a better job pleasing her. Once she has finished fucking him, Alexis has another punishment left to administer – making her slave suck his own ass juices off of her cock! Alexis just laughs as her bitch gags on his foulness; this is exactly what slaves that do not do as they are told deserve. She walks away in utter contempt of her bitch, telling him that he had better clean her dungeon right – or else it will be even worse for him. 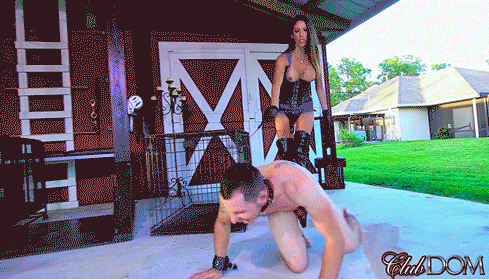 Mistress Michelle Lacy feels Like extending some guy pussy and will make strap on guy crawl around to her having the fuck pony on top of him then rams her 12″ inch hard black dick in his mouth area and informs him to slather it up so she can bang his horrible guy pussy butt he begs for more she fills his butt hole with all 12″ ins, ramming her dick in deeper and tougher than at any time before. 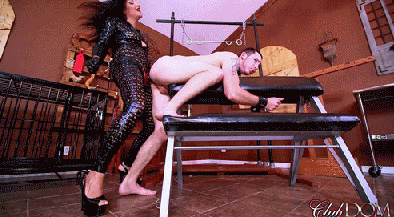 Mistress Kylie Rogue moves her cock right in to the extended man-pussy of one her most strap-on hungry male bitch. The lady informs Mistress Veronica Cohen that they can most likely fit the two cocks in at the same moment. Because this servant is so good prepared, Veronica flips the dog over and power drives him. The lady ruthlessly jackhammers in to his butt with his legs are strapped open wide such as the gaping bitch he is.

Mistress Raven Bay and Daisy Ducati Love to ruin males they have two butt clowns out of their crates today with their mouth covered around their THIRTEEN” inch dark strap on penis and notify the bitches that they will be having the butt knocking of their life today, Raven Bay his sadistic as well as aggresive using her Strap On the lady uses it such as a gun and extends and rams ass’s like you have never seen mistress Daisy is more the slow and deep type she fills your butt hole totally till the lady is balls deep, both woman totally eliminate these slaves banging their gaping gaps hard and very long also turning the sluts upside down and ramming them Pyle driver style. 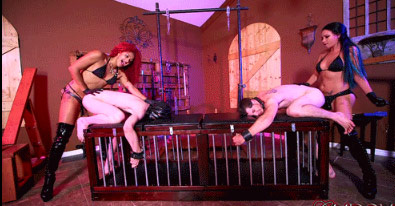