Mistress Cybill Troy has only one thought in mind – to inflict as much pain as possible on her slave’s balls until he has totally collapsed at her feet. Bound with ropes, Cybill’s slave is helpless as she lands kick after kick squarely into his nuts. Not only does the rope bondage keep his legs spread and balls exposed, but Cybill is such a sadist that, if her slave tries to fall over from the pain, the rope yanks his balls, hurting him even worse!

Cybill coldly kicks her bitch until he can take the pain no more and puts his head on the floor – but Cybill just keeps kicking him while he is down until he totally collapses, balls blackened and swollen as he gasps in pain. Cybill could not care less about the agony she has just inflicted on her slave’s worthless testicles, laughing at his suffering as she stands over him.

Jean, Kendra and Brianna are looking for a good ball busting bitch. They lead out three candidates and inspect their balls. They pick the two bitches with the best balls and instruct them to stand with their legs apart. The fun begins! The ladies kick, knee, punch and stomp the slut’s balls until they can no longer stand. Then they drag the bitches to their feet and start all over. By the time the ladies have had their fun, the bitches are curled into fetal positions, their swollen balls tucked between their legs. 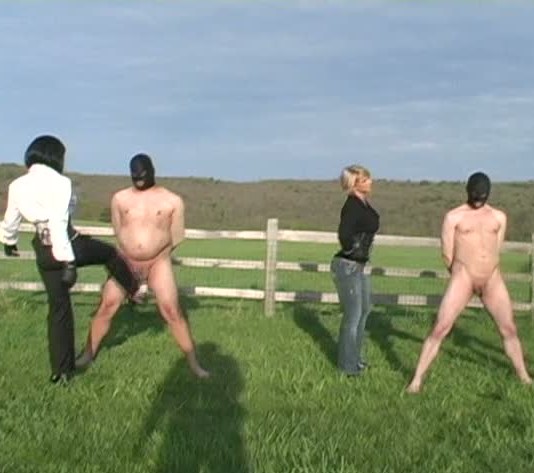 Mistress Niki brutalizes her slave’s balls with full force barefoot kicks. The brave slave takes as many kicks as his trembling body will allow. When he finally falls to the ground and curls up in a fetal position, Niki pounces on him and starts punching him in his aching balls. 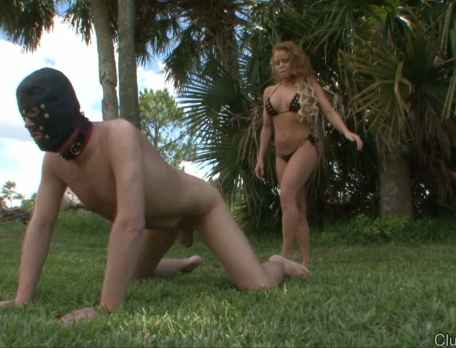 Ms. Venus Divine has her slave strung up in an utterly helpless position. His balls are completely vulnerable. Wearing her pointy toed shoes, Venus attacks his balls with repeated brute force kicks. No sooner than she lands one blow to his helpless nuts she backs up and does it again. When the trembling slave can no longer stand she puts him on his knees and starts in again. By the time Venus is done with this boy he is crumbled in a fetal position.

Mistress Natalia come with her slave on leash. She put him to a caning rack, link his balls and  neck  with rope.  Natalia rips into the slave’s ass with her bamboo cane, producing instant red lines.  When the slut begins to cry, Mistress grabs the rope around his balls and asks if he wants them to be the next victim of her cane.   Natalia has no mercy with this bitch.

Mistress Mia has her slave tied into a bondage chair.  Slave was  in chastity for 28 days.  Mia want see how full his balls are.  Mistress tell the slave if wants a relase, he can..but she  she’ll be punching him full force in the balls immediately afterwards. Mia play with his cock slowly. She realize, that  her soft hands can coax the cum right out of his cock. Sure enough, the male bitch cannot hold inside and shoots his load everywhere on the place. Mistress smiles at slave while she took his balls into her hands and BAM! Lady punches them as much as she can… 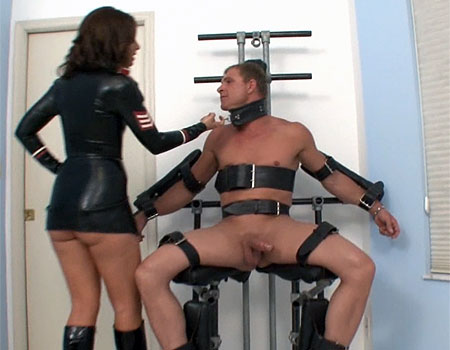 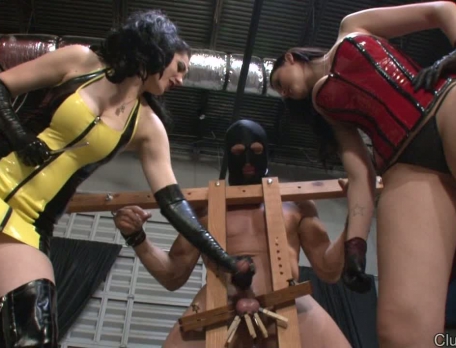 Tatiana has just purchased a new slave and his eager to introduce his balls to her sadistic manner . She has the helpless bitch bound tightly with his cock and balls strapped helplessly in front of him. Tatiana has a strong dislike for balls. She enjoys making her new slut scream in agony has she punishes his nuts. Tatina crops and canes her slut’s worthless balls until bruises and welts arise…and then she lays in even harder. She grabs her slut’s aching nuts and demands, “Who do these balls belong to NOW?” Tatiana laughs. She will enjoy tormenting this slut’s helpless balls. In fact, she has decided that all of mornings will start out just like this one. 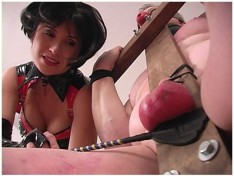 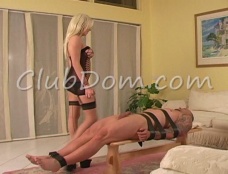